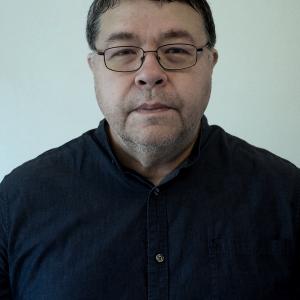 Biography As a mixed-blood urban Indian, I grew up between the Navajo reservation and my home in the suburbs of Los Angeles. Most of my Navajo relatives were Christian-ized and taught to see their Native culture as backwards and heathenous. Many succumbed to alcoholism. It was only in college that I began to be actively aware of and appreciative of my own cultural history and tradition. These experiences continue to influence my world-view and the art I create. I use a variety of media in my art such as painting, drawing, installation, assemblage, video and sound/music. I wrestle with ideas of spirituality, identity and place through my art. I am not interested in creating art that is merely decorative. I am for an art that engages and at times confronts the viewer. I am not so much interested in expressing my Self as I am in expressing my Humanity. In 2001, I was featured in the first season of the PBS television series, "Art 21: Art for the 21st Century" as well as in the companion book published by Harry N. Abrams. I served as an Arts Commissioner for the City of Seattle from 2000-2003. In addition, I have worked with community-based youth art groups such as Arts Corps, Red Eagle Soaring and Power of Hope. I continue to exhibit and lecture on a regular basis and I am also a musician/songwriter with a long history of performance and recording.   Interest Areas Art, Music, History, Religion, Post-Colonialism, Native American Studies.   Selected Bibliography Aaron Rosen, Art & Religion in the 21st Century, Thames & Hudson, New York NY. 2015. Lucy R. Lippard, Time and Time Again, Museum of New Mexico Press, Santa Fe, N.M. 2013. Dr. Nancy Marie Mithlo, ed. Manifestations: New Native Art Criticism, IAIA, Santa Fe, N.M. 2011. Henry M. Sayre, A World of Art, 5th edition, Pearson-Prentice Hall, Upper Saddle River, NJ, 2007. Art:21 - Art for the 21st Century, Season one, PBS Television, 2001. Links http://www.johnfeodorov.com http://www.pbs.org/art21/artists/feodorov