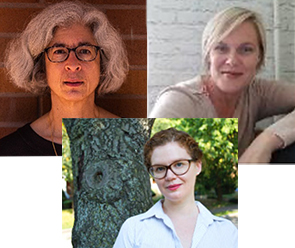 WWU faculty experts share their latest insights for understanding the war in Ukraine. What are the roots of Ukrainian national identification and how have Ukrainian national and civil identities developed since the Cold War? What are the mythological and historical bases of Russia’s relationships to Ukraine? How do Russian leaders and civilians view its war on Ukraine? Have Western geopolitics and economic globalization contributed to Russian military adventurism?

Susan Costanzo been a historian of Russia and the former Soviet Union for almost 30 years. She has studied and worked there since 1988 and was present in 1991 during the attempted coup that led to the dissolution of the Soviet Union. Her interest has been social and cultural change in the era from 1957 to 1991 by studying the relationship of artists with the Communist Party and Soviet society. She has published several articles in the US, Russia, Canada, Britain, and France.

Yuliya Tverdova was born in the former Soviet Union. Her formative years coincided with thefall of the Soviet bloc and the beginning of the post-communist transition in Russia. After moving to the United States at the end the 1990s, Yuliya studied comparative politics and post-communist transitions at SUNY-Binghamton. Her research and teaching interests are broad, and include public opinion, political behavior, electoral institutions, corruption, health policy and communist and post-communist societies in East Central Europe.

Sarah Ellen Zarrow's research focuses on Jewish life in Eastern Europe, particularly in Poland. I am especially interested in Jewish museum practices, language politics, and schooling. She holds a doctorate from the joint program of the Skirball Department of Hebrew & Judaic Studies and the History Department at NYU.